This week, the market volatility remained high, and the volatility of mainstream cryptos fluctuated within a narrow range. Volume showed a significant pick-up, with the spot market breaking 60 billion dollars the highest daily volume, and the total market value of the crypto market rebounded to 1.9 trillion dollars. Macroscopically, this week, the supervision of various countries did not announce more measures, and only a few countries expressed some degree of concern about the recent rise in speculative sentiment. However, the macroeconomic impact on crypto prices is more obvious. CPI and PPI were higher than expected, which led to the weakening of the performance of the U.S. dollar and U.S. dollar-related assets, and then lead to a certain degree of price correction in mainstream cryptos.

Due to the lack of sufficient positive information stimulation, although market confidence is still in the process of recovery, the volatility of mainstream cryptos does not change significantly, not exceeding 10%. Bitcoin historical volatility fell from about 78.5 to 74.3, and Ethereum historical volatility rose by 6.43%, slightly above the 100 moving average, entering the medium volatility range. Considering that the volatility level of Ethereum is acceptable, it is relatively beneficial for the strategy based on Ethereum.

From the perspective of skewness, due to the macroeconomic impact this week, investors' expectations for bitcoin tend to be neutral, but their expectations for Ethereum continue to remain high. This week's PolyNetwork theft did not affect the price and market expectations of Ethereum significantly.

In addition, due to the lack of stimulation of market sentiment and the uncertain macro-economy, the implied volatility of Bitcoin has dropped significantly by about 17%. Professional investors have responded to the uncertainty of the market in a timely manner. 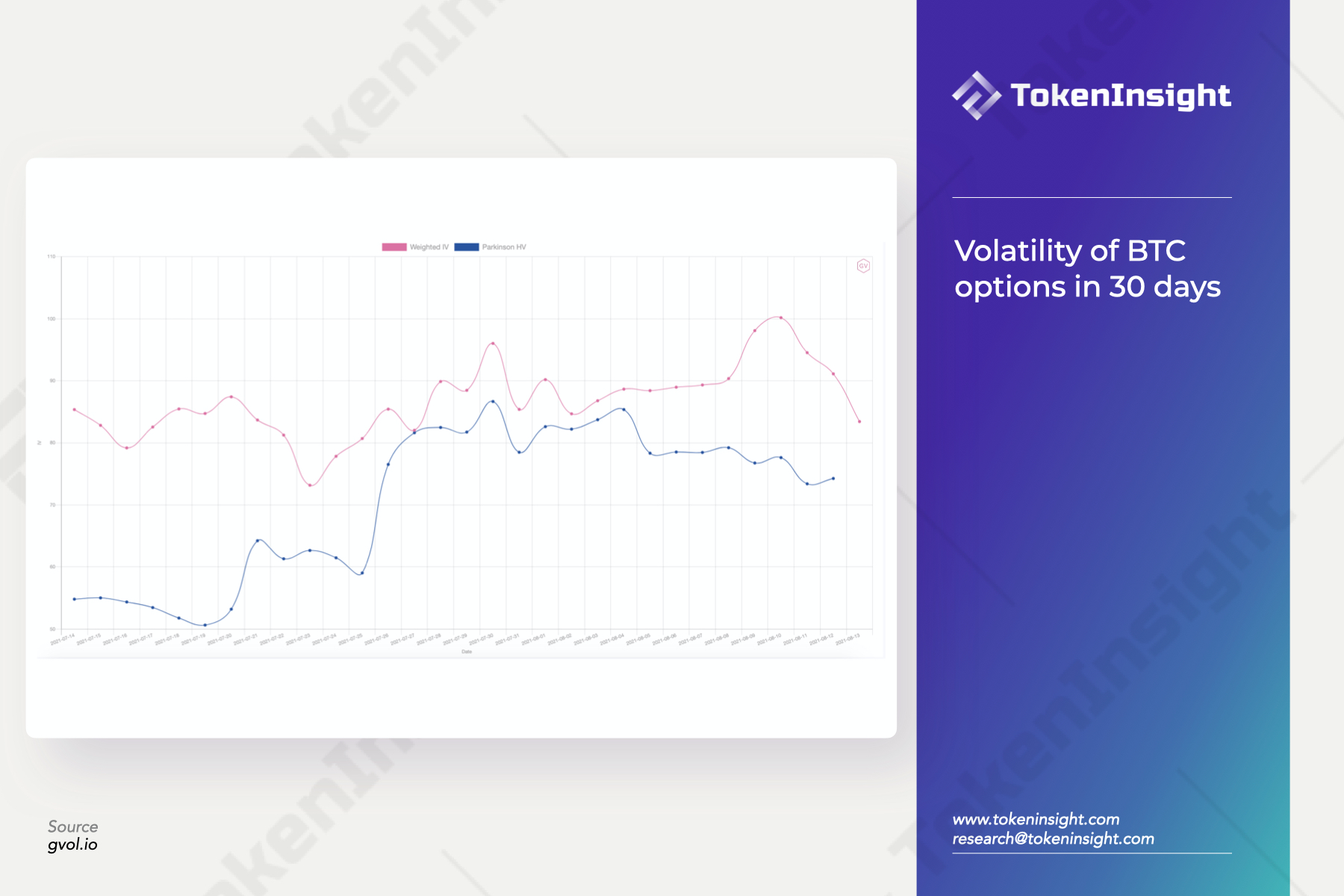 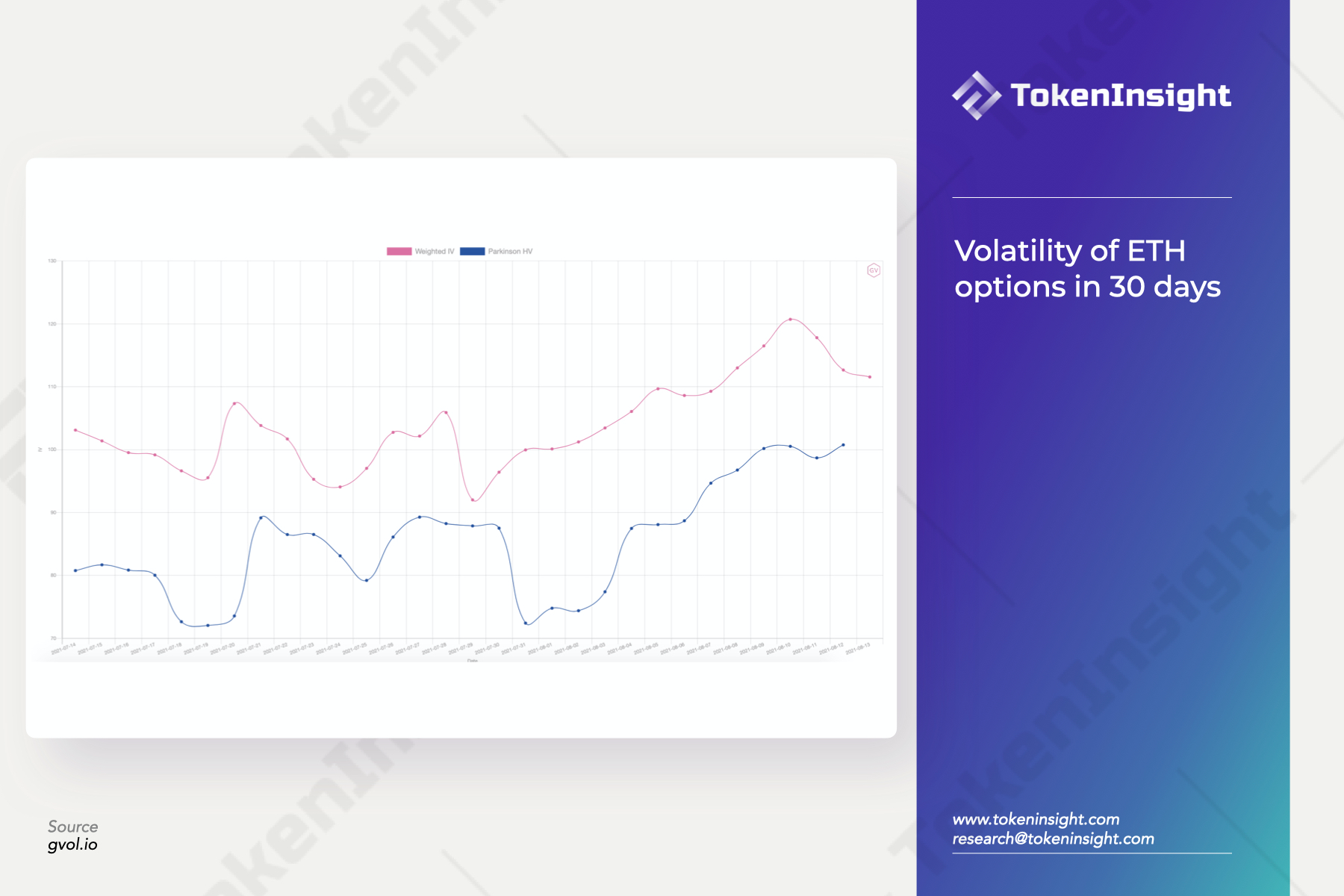 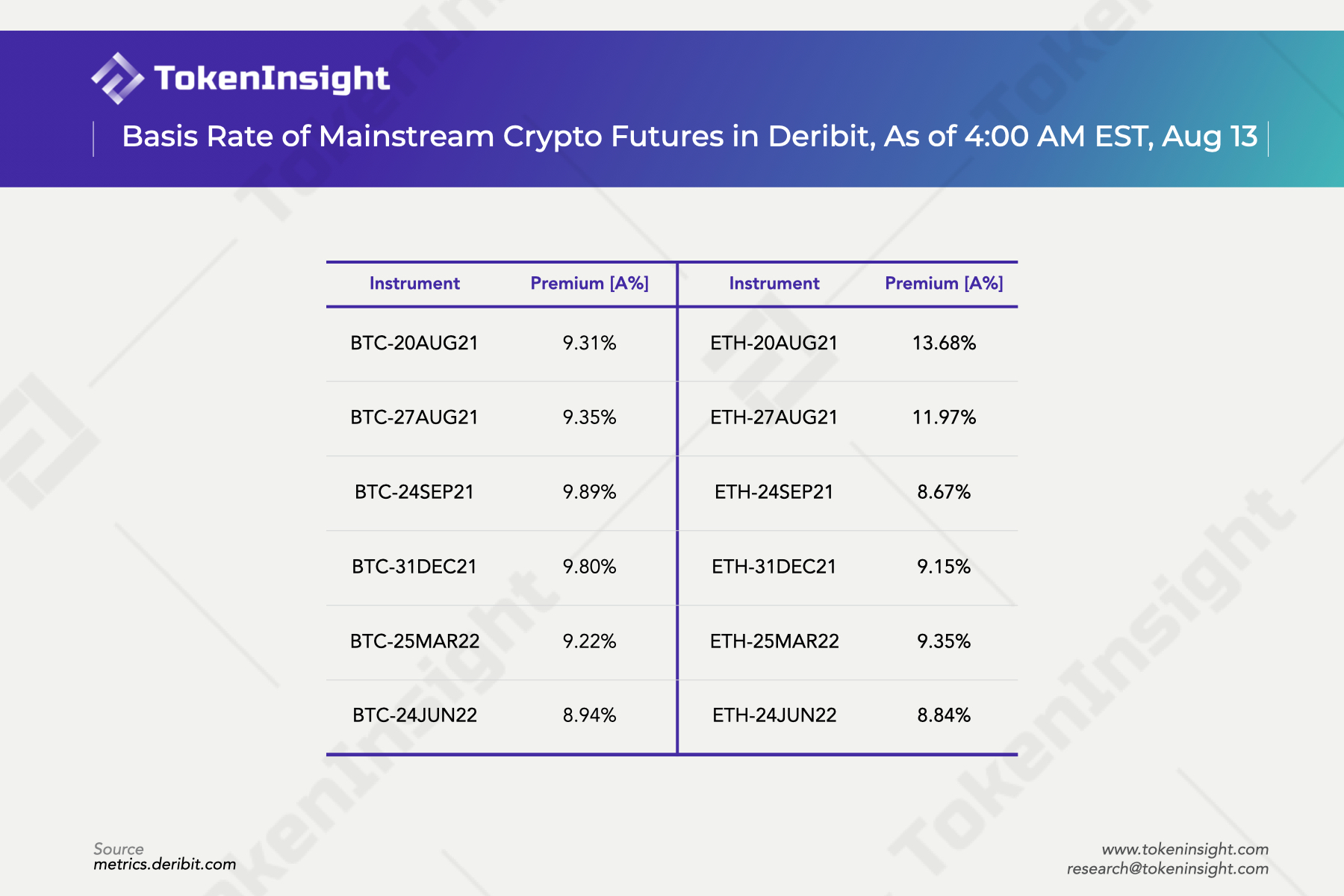 As institutions expect that the current liquidity and debt purchase scale will not affect the market risk appetite, the accumulated liquidity in the market is unlikely to be recovered before the end of this year. From July to August, institutional investor confidence recovered significantly and large bitcoin transactions continued to rise.

In addition, institutions have begun to prepare for extensive participation in crypto-related investments other than bitcoin, and institutions such as Goldman Sachs have evaluated the performance of related asset returns. Coinbase said on Tuesday that a large number of hedge funds have invested in cryptos, and bitcoin-related transactions have been overtaken by Ethereum.

Affected by the rebound in the market, the performance of crypto mining has strengthened. The stock prices of US-listed companies such as Coinbase, Bit Digital, Ninth City, BTCM, Riot Blockchain, Cannan Technology and other US-listed companies have rebounded sharply, while Power bridge's share price rose 44% in the day after announcing its participation in crypto mining.

In terms of supervision, China, India and Russia have generally expressed concern due to the recent rebound in the crypto market, but their main behaviour are anncouncing statements, whose influence is relatively limited.

In terms of CBDC, some small countries such as Jamaica and others have begun to test first, while the United States, India and other countries are still hesitating.

In terms of macroeconomics, the US CPI and PPI data released this week collectively reflect that inflation continues to rise rapidly and the momentum has begun to slow down, ending the worry that inflation has exceeded expectations in the past four months and the Fed will reduce its weight in advance.

It is expected that in the next one to two quarters, the level of inflation in the US will remain high. However, due to the Fed’s strong guidance on inflation expectations and inflation being more regarded as a tail risk by the market, the Fed’s monetary policy adjustment will focus more on the improvement of the labor market, and quantitative easing may be reduced in advance, which will affect the expectations of the crypto market.

In the absence of obvious downward momentum within the market, the influence from outside the market will be even more obvious. Considering that more important economic data will be released next week (such as the number of jobless benefits in the United States, the EU's second-quarter GDP, second-quarter employment, July CPI, and the New Zealand Federal Reserve's interest rate resolution, etc.), the macroeconomic impact on the crypto market will begin to increase significantly next week, and investors need to continue to pay attention.

Use TokenInsight App All Crypto Insights Are In Your Hands
Open